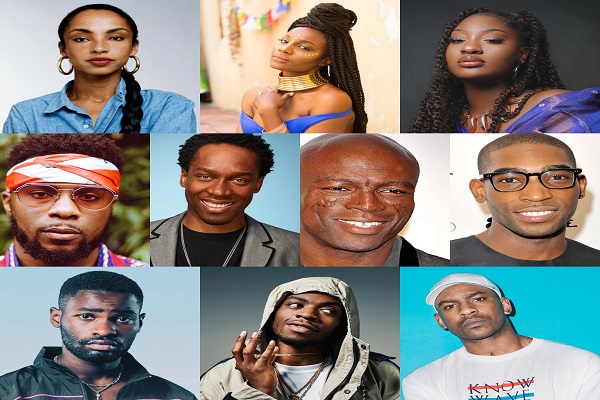 People sometimes don’t refer to them as Nigerians but as entertainers of Nigerian descent.

Nigerian-born British Helen Folasade Adu is a singer, songwriter, and actress and the lead singer of her eponymous band.

Born in Ibadan and tutored in Essex, England. Adu is the first Nigeria origin to register her name in the prestigious Grammy Awards. She has more Grammys than any other Nigerian till date.

Henry Olusegun Adeola Samuel, globally known by his stage name, Seal, has a personality you can’t forget in a hurry. Apart from the scar on his face, his style and music are totally different. Seal was born in London to a Nigerian mother, Adebisi Ogundeji and father, Francis Samuel.

He is a singer, songwriter, musician and record producer. The four-time Grammy Awards winner has several hit banger songs including his most celebrated song “Kiss from the rose”.

‘Yolo Yolo’ sensation, Deborah Oluwasheyi Joshua, popularly known as Seyi Shay was born and raised in Tottenham, London by Nigerian parents. Born to a Northern mother and father, native of Ife. She is a professional songwriter, singer and actress.

Shay is one of the six judges in Nigeria Idol. She has also earned herself a place in the Nigeria Entertainment Industry

Grammy Awards Nominee Temilade Openiyi popularly known as Tems was raised by a Nigerian mother and a British-Nigerian father. She is a singer, songwriter and producer. Tems has been featured by international acts like Beyoncé, Drake, Wizkid, and Future.

Lemar Obika was born in Tottenham, North London to Nigerian parents. A singer, songwriter and record producer, rising to fame through the BBC’s Fame Academy.

David Orobosa Omoregie popularly known as Dave is a British rapper, musician, singer, songwriter, record producer and actor. Dave was born in Brixton, South London in the home of parents from Edo, Nigeria.

Dave’s political song “Question Time” which criticised the British Government, won the Ivor Novello Award for Best Contemporary Song in 2018. The rapper is well respected among his colleagues in the for his prowess.

Dave has MOBO Awards, Brit Awards, and Mercury Prize among others in his cabinet

Lukman Olanrewaju Odunaik better known as Not3s is an actor, songwriter and rapper.

He was born and nurtured by Nigerian parents in Hackney, London

The Ogun state born rapper originally a DJ has produced and featured on numerous hits including a song with ASAP Rocky’s single.

He has enjoyed most of his accolades and fame in the UK and in international sporting events.

His 2010 third single “Written in the stars” became the official theme for WrestleMania XXVII and was also used as the entrance song for the New York Giants before Super Bowl XLVI.

How To Start Dog Treat Business From Home

Fruit Smoothies That Are Good For Weight Loss