She said this while addressing the public for the first time since being named the new leader of the church. 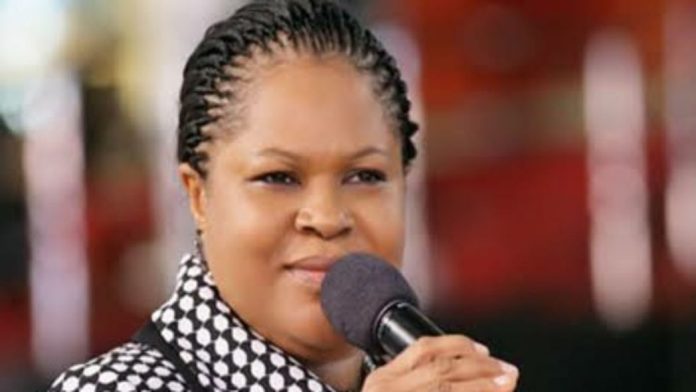 Evelyn Joshua
Late Prophet TB Joshua is still the General Overseer of the Synagogue Church of all Nations, his wife Evelyn Joshua has stated.
She said this while addressing the public for the first time since being named the new leader of the church.
The church had announced her as new leader on Saturday after a Federal High Court in Lagos appointed her as chairperson of the church’s board of trustees.
Evelyn made a rallying call to the church members and partners in a video posted to Twitter on Monday.
In an apparent effort to appease aggrieved persons, she declared that her late husband Prophet TB Joshua remains the founder and general overseer of the church.
She said, “I am pleased to address you at this moment upon my appointment as the leader of the SCOAN.
“To all our members, partners, friends, and compatriots of faith, I say Good morning and win today. It has been three months since the glorious home call of our dear father, founder and General overseer, Senior Prophet Temitope Balogun Joshua, which occurred on June 5, 2021.
“These past three months have surely been challenging but we thank you all for remaining strong and for keeping the faith as we have been trained, built, instructed, and taught by God’s servant himself that trails are the soil upon which faith flourishes. We salute your faith.
“Today, like always, is a new dawn in the SCOAN. As we all know Prophet TB Joshua fought his good fight of the kingdom and finished strong to the glory of God. We have now commenced the journey from where our father left the baton.
“He had already prepared us all for this new phase and we must rise up to the occasion as a team under the command of God and the direction of the Holy Spirit.
“This journey is for us all. The SCOAN cannot be without you, all the members, partners and friends of the ministry.
“So, this now serves as a clarion call for you to rise as an army of God as we push this great commission forward.
“I am not your general overseer. My dear husband and our dear father, the prophet for generations, senior Prophet TB Joshua remains the founder and general overseer of the SCOAN.”
The leadership of the church had on Sunday said no one is being victimised or detained over the ongoing audit.