Rihanna and Salle
A 17-year-old hawker with a great voice has revealed that Rihanna contacted her after her video went viral.
The lady with a beautiful musical voice shared the latest information about the Grammy-winning singer, Rihanna contacting her via her Twitter page.
Recall that Salle was seen in a video singing with a voice that amazed many social media users.
In a video that made rounds on social media, the young girl who held an empty tray was asked to do a freestyle on a beat and she sang beautifully. 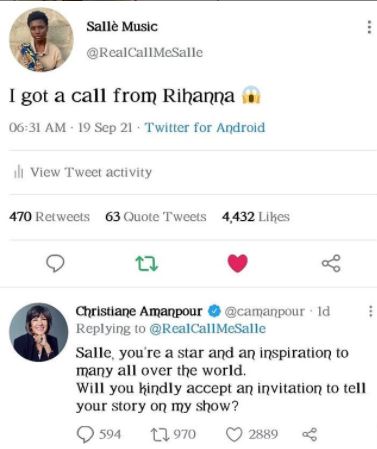 Well days after her emergence on social media, platforms were created for her on Instagram and Twitter with handle @RealCallMeSalle.
She revealed via a tweet on the page that Rihanna called her.
”I got a call from Rihanna,” she wrote.
Salle had earlier taken to her page and thanked Don Jazzy, Tunde Ednut and some other celebrities for reposting her video.
Watch video below:
https://www.youtube.com/embed/IscATNjaJu0