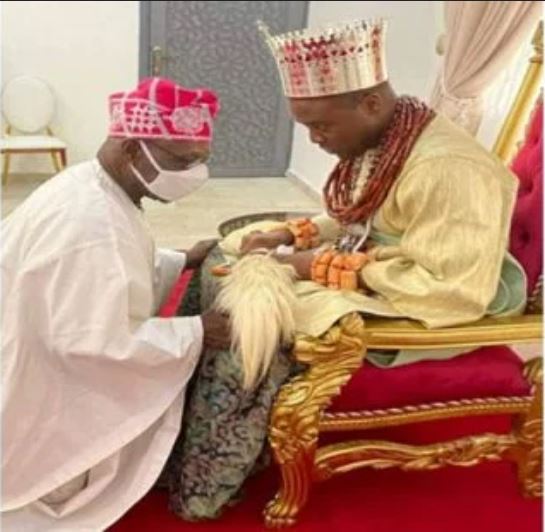 Olusegun Obasanjo, a former President has paid a visit to the newly crowned Olu of Warri, HRM Ogiame Atuwatse III.

During the visit, the ex-president bowed in homage to the newly-crowned monarch.

Ex-President Obasanjo had visited the monarch shortly after his well-attended coronation, despite the fact that the occasion clashed with the presentation of staff of office to the Emir of Bichi, who is an in-law to the President, Major-General Muhammadu Buhari (retd.)

The 84-year-old statesman, himself a prominent Egba chief, was captured kneeling before the youthful Ogiame, who, though seated on his throne, deferred to the aged ex-president as he paid the youthful monarch due respect.

The 37-year-old monarch, who was on Saturday crowned the 21st Olu of Warri, immediately assumed the title of Ogiame Atuwatse III, in the footsteps of his late father and 19th Olu, Godwin Toritseju Emiko, Atuwatse II.

After his coronation on Saturday when he wanted to make his maiden address, the Atuwatse III stated that though people in his presence are expected to stand up whenever he does same, he would rather that everyone remained seated while he delivered his speech.

Most of his chiefs, however, observed the tradition and maintained a standing position while the Ogiame’s speech lasted.